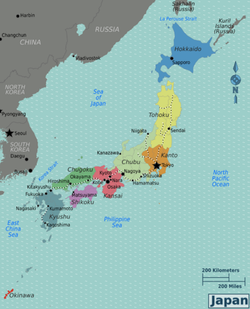 Japan's history reaches back several thousand years.  It is a land of stark contrasts and rich traditions.
Japan is an archipelago consisting of almost 6,900 islands (the exact number is 6,852).  There are four main islands in Japan: Hokkaido, the furthest one to the North; Honshu, which is usually called the main island as most of the major cities are located there; Shikoku, the smallest of the four and least populated; and Kyushu, the furthest to the Southwest and home to dozens of volcanoes and hot springs.
The Japanese government is a constitutional monarchy headed by an Emperor, who has little power in day to day affairs, but has last say on important cultural decisions.  According to legend, the Imperial Family is descended from the ancient sun goddess, Amaterasu Omikami.  The Japanese Imperial Family is the longest continual running royal family in history, stretching back to the 700s.
Japan is very mountainous country with several mountain ranges scattered throughout.  The tallest mountain in Japan is Mount Fuji at 12, 388 feet.  Mt. Fuji is a popular tourist destination for its spectacular sunrises and spiritual significance in Japan.  There is a saying in Japan that goes "Everyone should climb Mount Fuji once.  Only fools climb it twice."
Japan is full of great cities, each with a different local culture.  Tokyo, is just a piece of Japan, though most people think of it when asked about Japan.  Though it is the current capital of Japan, it began it's existence as a small fishing village until the Tokugawa shogunate established it's capital there in the early 1600s.  It officially became the capital of Japan in 1868 when the Meiji Emperor transferred his residence there from Kyoto.
Kyoto is the cultural center of Japan with many important temples, shrines and bases of cultural studies.  Kyoto was the capital of Japan from 794 to 1868.  Today, it is an important hub for Japanese culture.  Several of the temples are hundreds if not thousands of years old.